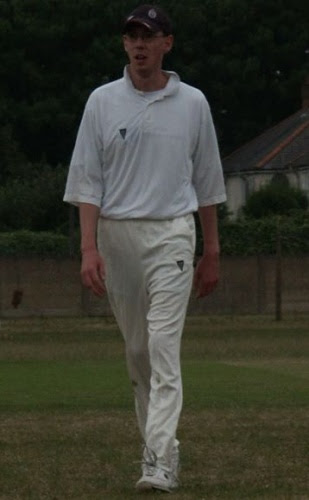 Rod is affectionately known as FPS (Future Permanent Secretary) following his rapid promotion to G5 at the tender age of 17. As befits his youth, Rod is one of the team's more agile fielders and has a fine throw and a generally safe pair of hands. He is also our quickest regular bowler by some distance but does not always get the wickets he deserves, frequently suffering a number of edged catchable boundaries due to lack of competent support in the field from his ageing teammates (he has been known to stand with hands on hips staring skywards as the demon Pope snares another victim). Rod knows how to hold a bat but does not get many opportunities to show his capabilities.

Rod played even more games in 2009 than in 2008 but took fewer wickets. Continued to suffer from lack of quality Dodgers fielding. There was some solace in a few good knocks with the bat (and a nice average courtesy of having only been out once) and was as ever, athletic in the field and took four catches.

Would like to see Reading promoted by the start of the 2010 cricket season.

He continues to drink more ale than lager which has to be a good thing.