Statistics struck from the record again in the case of Dodgers vs. Weasels

Dodgers (217-5, 35 overs) produced an arresting performance yesterday to defeat the Weasels (212-6) at the Met Police ground.

Pre-match talk featured phrases such as "batting on a shirt front", "weak bowling attack" and "record opening partnership last year" – and as skipper Priest won the toss and sent out Dollin and Taylor under blue skies, everything was going to plan.  'Taylor duly played on to the fourth ball of the game; Dollin could reach only 19; and neither Radcliffe nor Lindsay could get in. Thank goodness then for all-time Dodgers top run scorers Priest and McBarron, who with a late cameo from JH, propelled Dodgers to 217 from the allocated 35 overs.

Of the opinion that they had little chance of securing his conviction, Weasels starved Priest of strike, choosing instead to prosecute his partner-in-crime. This was a mistake. The case was duly thrown out of court as McBarron hit an unbeaten 57 from 51 balls. Priest – who scored 89 from 94 balls – left the field to deserved applause in the final over, perishing only in pursuit of a deserved century. The pair's record-breaking 5th wicket partnership of 123 comfortably eclipsed Carr and Crawford's 114 vs. Transec in 1999.

Hilary bowled superbly in opening the case for the defence with Bennett, conceding only 19 in his seven overs. However, Weasels had sent out their robotic opener

Michaels1000 to interrogate the Dodgers' attack and as usual he asked some searching questions in a plummy and mechanical monotone. He looked set for the day.  'No wonder, then, that a couple of Dodgers watching from the public gallery (covers) celebrated loudly and prematurely as they thought he'd nicked it behind –  'evidence from "snicko" was ruled inadmissible.  'By the time McBarron removed the other opener, caught Radcliffe at cover, Weasels already looked well set. And unknown to them, Dodgers were soon to be forced into employing a part-timer to make up the overs.

Things didn't look good. But Taylor surprised everyone (including himself) by bowling 6-0-40-1 and with great work from Rob Fox – who snared Dyer caught brilliant over his shoulder by Bennett – the case started to swing in the favour of Dodgers. The return of Bennett to the attack then appeared decisive as Michaels1000 was dismissed for 80, departing briefly from his programming to play all round a straight one.

Lusty blows from Gladwin aside, things were looking comfortable with 35 needed from the last two – and Weasels almost lost their next witness before he even took the stand as Michaels1000, now umpiring, looked at his watch and said without hint of jest: "He's got 40 seconds. I'd LOVE to give someone timed out."

The incoming old biffer, though, had other ideas for Taylor's seventh over and despatched huge straight sixes from his first three balls. Four from the next, off the foot of a diving Bennett, was followed by a dot and a scrambled leg bye. Taylor found himself in the all-to-familiar position of having rank bowling figures and a shell-shocked Dodgers found themselves defending 12 off the last over.

Like Priest and McBarron before him, however, our death-bowler proved to be the man for the moment and too wily by half for the opposition. Nine from three and it was still on –  'but by cramping the old biffer and bowling Omar, Rob "the finisher" Fox put paid to Weasels' chances and consigned them to the most harsh of cricketing sentences: defeat.

Note: The total balls faced in the Dodgers innings should add up to 210 but only total 200. 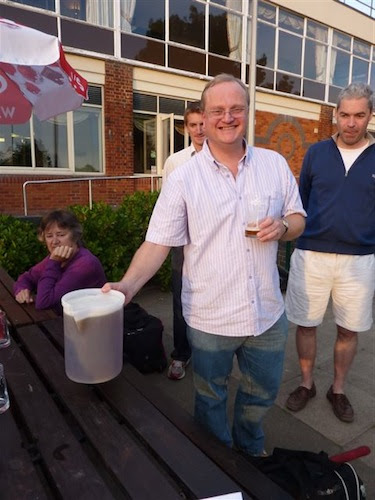