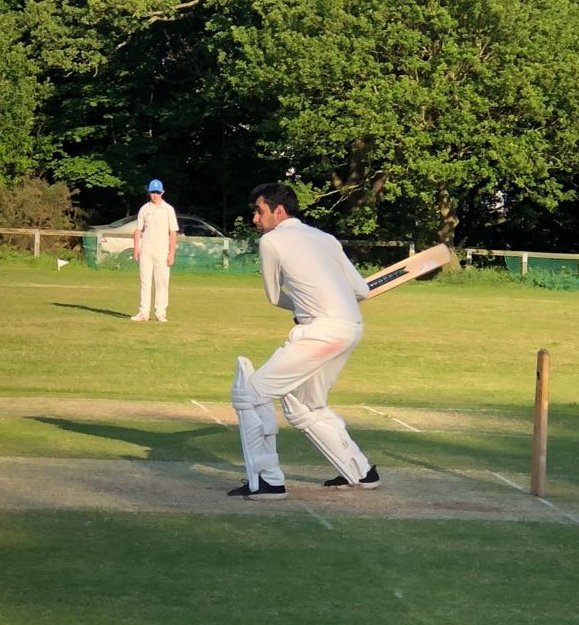 Here is Ayyub scoring the winning runs for Dodgers against Buckhurst Hill on Sunday 20 May with a cracking six into Epping Forest. Fantastic victory, with both Mehboob and Phil scoring 50s. Three wickets apiece from Jason and Ayyub, ably supported by Bilal, Jim and Tom. Up the Dodgers!

Delighted to be able to report 2 victories in a week following yesterday’s game in the sunshine up in ‘Towie Land’ (Buckhurst Hill), whereby Dodgers were victorious in a timed game. Having agreed to let the oppo set us a target, Dodgers' bowling was surprisingly on point from the start with excellent opening spells from both Bilal and Jason, who were then ably supported by Aiyub (on debut) Tom and James (both guesting courtesy of Jason).

Having blitzed through BH’s top order leaving them 58 for 8, a hasty captains conference was called whereby it was agreed BH could bat 12 in order to make a game of it. Some lusty hitting from their lower order inc the 12th man led to BH posting a respectable 185 which gave us something to chase in the afternoon sun.

Notable shouts to both Jason and Aiyub takin 3 a piece with the former nearly also taking a hattrick where the potential 3rd victims edge dropped just short of Phil at slip. Mehboob opened our reply with Phil and played in his usual cavalier style, bashing it to all parts (including tonking a parked car…) and soon retired on 64, again in the interests of giving all a go. Phil played a fine patient knock at the other end, accumulating his own 50, whereby he also retired.

Despite a customary Dodgers mid-innings wobble (myself and JH going cheaply) we always had plenty in reserve and it was left to Aiyub to loft a lovely 6 over square leg to finish the game in style. We then retired to BH’s clubhouse down the road for a pint or 2 in the setting sun.