Posted by jhilary on June 06, 2019
For reasons that will become all too obvious, Captain Mike (deputising again for Ralph) has requested that the match report from this evening's game be kept as short as possible. In fact, he asked that there should be no report at all.

Suffice it to say that Dodgers did not cover themselves in glory. Apart from a swift knock of 27* from Mehboob at the top of the order, we were unable to score freely off the Marauders bowling and the 125 we posted off our 20 overs was always going to be a little light.

It might have been closer, as Bilal, Noman, Tom, Jack and David bowled well against some strong hitting. But six dropped catches on our part and lots of mediocre ground fielding meant that we were our own worst enemies. The Marauders deserved their win, not least for their extra-swift running between the wickets, and we will need to up our game considerably for the return match later in the season. 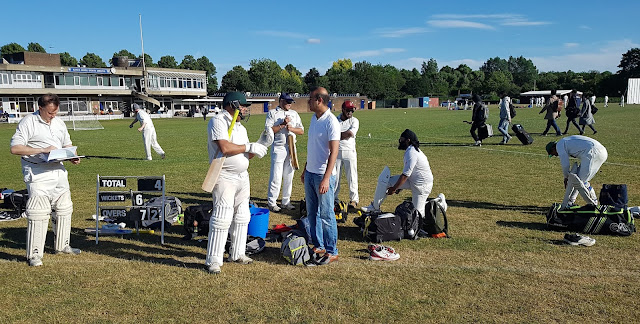