Posted by jhilary on August 24, 2019
Another glorious sunny evening saw Dodgers assemble at the Battersea Ironsides ground in Earlsfield for this season's rematch against the Marauders, our last evening game of 2019.

Captain Ralph agreed to allow the less-than-punctual oppo to have a bat, and we started briskly enough with Milind and Adam picking up good pace from the get-go. Debutant Dan and Charlie came on as first change and did equally well, but the Marauders really began to hit out when the Dodgers spin attack of John and Ralph found the artificial wicket not to their liking. Special mention herewith for Mike's exceptional one-handed catch behind the stumps, more than making up for his earlier decision to pass up a routine chance which required no diving or rolling. The oppo's eventual total of 139 made it easy to calculate the run rate that would be required from our 20, but even with short boundaries and a quick outfield that still looked a lot to get.

Komal and Milind opened our response with some blistering boundaries, and we were in front of the game by the time they returned to the pavilion as retirees. Yet the Marauders' bowling was disciplined throughout, as was their fielding, and before long our run rate had crept up beyond 8 an over. Jatinder and Tawhid ran well between the wickets, as did our other debutant for the afternoon, Freddie, but by now the light was fading fast and we were staring defeat in the face. Not even a middle order of Mike, Dan, Charlie and Ralph could save us when the strongest Marauder bowlers came back at the close. Yet it was a good game against a friendly team in great surroundings, and we look forward to trying for our revenge next year. 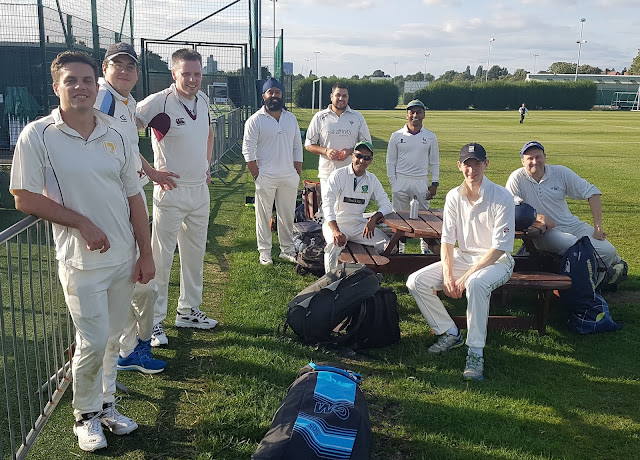