Posted by jhilary on August 14, 2019
Dodgers returned to Chiswick for our last home match of the 2019 season on what turned into a very pleasant sunny evening. Our oppo, the Ministry of Justice, had also turned up punctually so we were able to start promptly at 6pm, although playing with an orange ball to preempt any problems with the mid-August light. Dodgers lost the toss and were put in to bat.

Komal and Tom B started swiftly, the former retiring with his 25* almost as soon as he'd come out. Tom followed soon after, his final shot being a massive full toss 6 off a high no ball and thus scoring us an exceptional 8. Jatinder was also on fire, notching up his own 28* so that we were a massive 110 off our first 10 overs. Tawhid, Captain Ralph (another excellent 25* retiree), Shane, Mike, Ephraim and Noman kept the scoreboard ticking over nicely, although the bowling did get tighter as our innings progressed. Privately, the MOJ admitted that they had not brought their strongest attack with them, but 172 for 3 was still a cracking good total for Dodgers off our 20 - maybe even a club record?

Bilal and Noman opened our attack and MOJ were struggling from the start to keep up with our run rate. Yet we did not manage to take any wickets on what was an excellent pitch given the late stage in the season, and MOJ batsmen also began to retire in their turn. Ephraim, Shane, John and Ralph each contributed and in any other game the MOJ's knock would have been more than competitive. Yet at 142 off their 20 they were a full 30 runs short of our total. Our strong batting performance was the deciding factor in a game that saw well over 300 runs scored in 40 overs. We look forward to carrying on in like vein when we return to Chiswick next year! 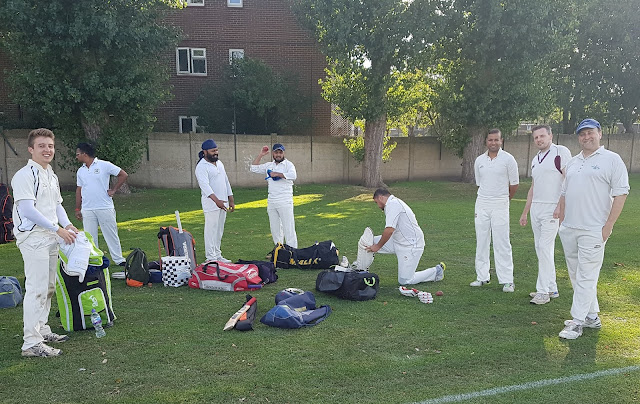