Posted by jhilary on August 08, 2019
Dodgers returned to the pleasant ground of Turney Road in Dulwich for this season's showdown with Tilberg Regents. The Dodgers team being uncharacteristically on time, Captain Ralph agreed that the less punctual Regents should bat first. NJ set us in motion by bowling their opener first ball, while Bilal put down his usual disciplined mix of pace and knuckle balls to confound their batsmen. John H took over in combination with Ephraim, playing his debut game for Dodgers, and together with Jatinder managed to make their way steadily through the Tilberg wickets, despite taking the occasional beating from a batting line-up which showed no signs of weakening in the lower orders. Mention must be made of the superlative Dodgers fielding effort, especially the one-handed slip catch plucked out of the air at pace by Ephraim off Bilal. The fact that Tilberg only made it to a total of 106 owed much to our discipline in the field.

NJ and Fred, our other debutant for the afternoon, opened the batting for Dodgers, and before long we were motoring at more than 10 an over. Yet our innings threatened to follow the same pattern as Tilberg's, as we lost a flurry of wickets in quick succession. Fred was bowled after some elegant stroke play, Tom hit a beautiful six before swinging across a straight one which kept low, NJ was caught in the deep after a couple of his own sixes and Shane was also removed quickly, so that we were suddenly 4 down. Never one to be flustered, the experienced Tawhid steadied the ship and with Ephraim built a commanding partnership that gradually took us towards the 100 mark. The run rate dropped back dramatically, so that there were moments when the more nervous Dodgers fan could be seen reaching for the diazepam bottle. Yet even an overgenerous display of wide-tolerant umpiring was not enough to stop our forward progress. Ephraim retired after a couple of cracking sixes and Jatinder came in to administer the coup de grâce with a delicate late cut to the boundary. Dodgers may have left it to the last over, but the win was ours. 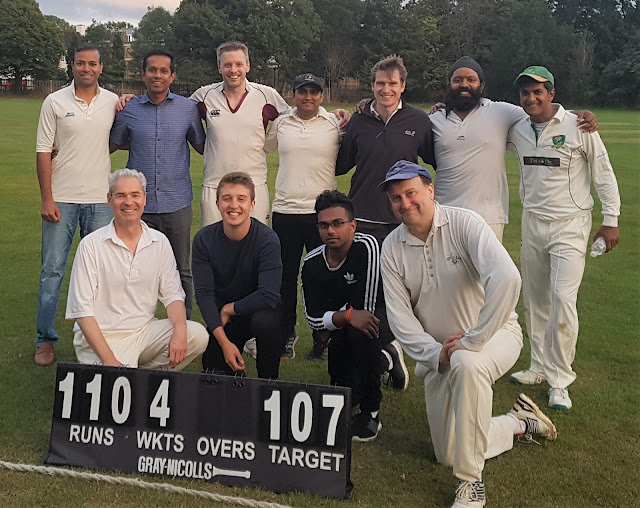 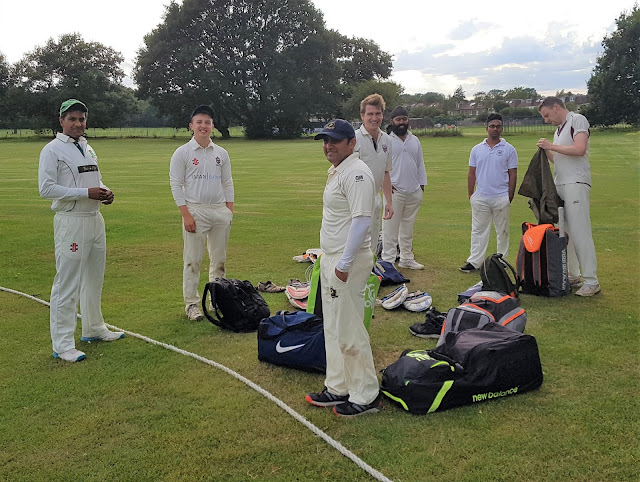 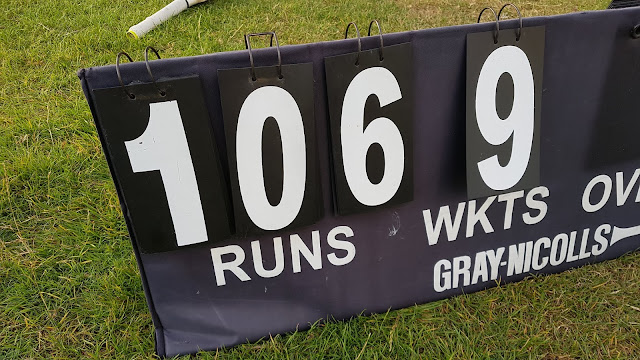