Posted by jhilary on July 31, 2020
Dodgers were treated to a second T20 game in a week as we prepared to take on the Weekenders in the blazing Chiswick sunshine. A brace of club birthdays (Ralph and Jack) meant that we were a bit short of Dodgers regulars, and many thanks are due to Mike D and the South Bank stalwarts for helping us make up a full team.
Dodgers batted first, with Mehboob and Tawhid leading the charge against some tight bowling early on. The pitch was playing well and the outfield was lightning quick, so before long the scoring rate began to bound upwards. Mehboob retired with a very effective 28*, and Tawhid was joined at the crease by Jatinder, who after some nice hitting lofted a glorious six over the square leg boundary before being caught next ball. Tawhid and Simon (South Bank) belied the hot sun by running a four to the long boundary and then numerous singles, before both eventually succumbed to heat exhaustion and a couple of straight balls. Mike D's evening got off to a poor start when he was given LBW for nought (and it would get worse later) but Phil steadied the ship with yet another cracking innings of 27*. Zach (SB) and Chairman John saw out the innings, the former scoring boundaries with almost every shot. The Dodgers total of 147 for 4 looked mighty impressive, but we were taking nothing for granted.
Mike M and Brad (both SB) opened the bowling for us, and all was going well until a wild one flew over the head of the batsman full toss into Mike D's finger. Once he had removed the wicket-keeping gloves, the damage was clear to see - a nasty dislocation, confirmed by X-ray later that evening (see below). Tawhid briefly took over keeping duties before Mike M revealed he was happy to do so for the rest of the innings, Mike D now being reduced to an ice pack and an early bath. Chairman John was elected stand-in captain by acclaim and the game continued, with Zach bowling good pace and Dan (also SB) chipping in with two excellent wickets. John and Jatinder both turned their arms over, the latter picking up a good wicket of his own, and Mehboob joined Brad at the end to close down the match. Despite a spirited fight-back by the Weekenders, Dodgers held on to win by 24 runs. 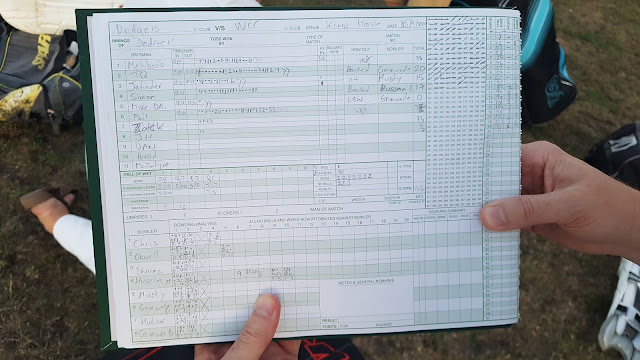 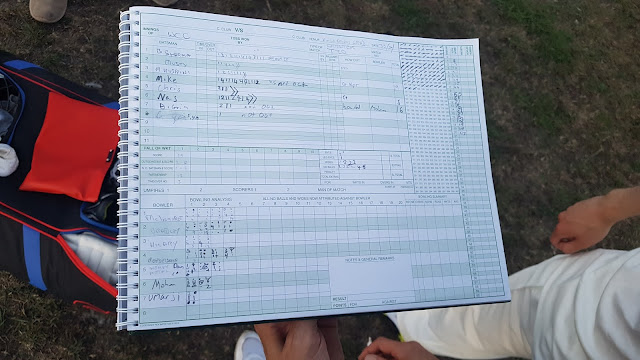