Posted by jhilary on August 06, 2020
Cricket, unlike football, is a game of three halves. Against a typically strong Marauders team, Dodgers managed to win the first two with brio, and then to lose the one that mattered.
The first half of the game (the Marauders innings) could hardly have gone better. As noted by several Dodgers players afterwards, this was one of our very finest exhibitions in the field. All six bowlers contributed, with Jack bagging another three-wicket haul, and the fielding was top quality. Special mention for an astonishing jumping catch by Tom at cover, an excellent one by Brad at square leg, yet another for Captain Ralph behind the bowler's arm, a lightning quick slip catch by debutant Matt and an equally smart stumping by Komal to remove the ever dangerous (and sometime Dodger) Dan Malins. As a result of all the above, two excellent run-outs and some heroic stops along the ground, we managed to take their 10th wicket in the 19th over and restrict them to 106 all out.
The second half of the game (our first 10 overs) was a joy to watch, with Tom and Komal treating us to some delicious stroke play - witness Tom's back foot straight punch for 4, captured brilliantly by Jatinder Spielberg in the video below. Despite losing Tawhid and Simon cheaply to some accurate Marauders bowling, we welcomed Matt to the crease together with the torn muscle he had pulled while fielding for us at fine leg. With Ralph acting as his runner, we were well ahead of the rate at the turn, and we still had 8 strong wickets in hand plus the option of Tom's return, if needed, after his excellent 26 not out.
And so to the third and final half of the game: our last 10 overs. Whether it was the novelty of finding ourselves notionally in the lead or the confusion of who was meant to call when a runner is on the pitch, things began to slow down dramatically just as we looked to be cantering for home. To be fair, the Marauders bowling had considerable strength in depth, and many of the balls coming down in the last few overs were unplayable. Yet our failure to sense the urgency of the situation and take singles when they were on offer translated into too many dot balls and cost us the game. Matt retired with a sterling 25 not out, leaving Jatinder, Jack and Ralph to come in at the close. Ralph connected with a couple of beauties in the last over, but it was too late. We had snatched defeat from the jaws of victory, but we live to fight another day.
Man of the Match votes: Jack 7, Tom 3, Komal 1
Scorecard 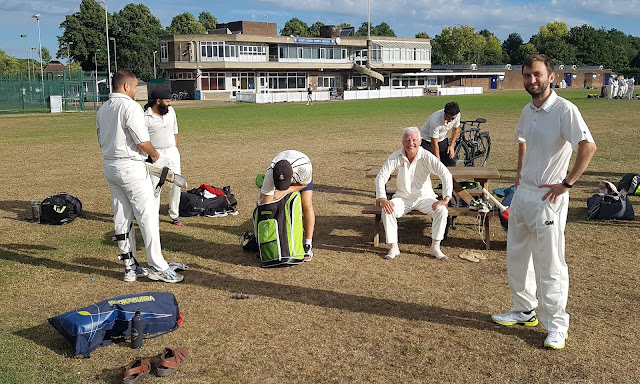