Dodgers reconvened on a sunny but still rather chilly Chiswick evening to take on the might of Her Majesty's Treasury [insert your own budget-related joke here].

Taking to the field, our first pairing of Jack and Mike Mc bowled excellently against what looked to be two very handy HMT openers. As the oppo started to hit out more, Adam brought his in-swingers to bear, picking up a brace of very handy wickets at just the right time. John and Ralph tormented the middle order with some slower stuff as sharp fielding pegged back the run rate, which had at one point risen ominously. We felt content with restricting them to 116 off their twenty, but there was no sense in which this would be an easy chase given the soft wicket and verdant outfield.

Mehboob and Komal got our innings off to a fine start against some high-quality Treasury bowling, the former retiring after a glorious straight six lofted high and long over the bowler's head. Komal also got in on the act, hitting his own straight six on his way to retirement, so that we were up with the required run rate as we reached half way. As so often, however, our innings became becalmed at just the wrong moment as HMT brought on their own devilish spinners, and we found it increasingly difficult to get the ball off the square. In the end we fell a good 22 runs short of the target, but it was a very pleasant game played in the best of spirits. 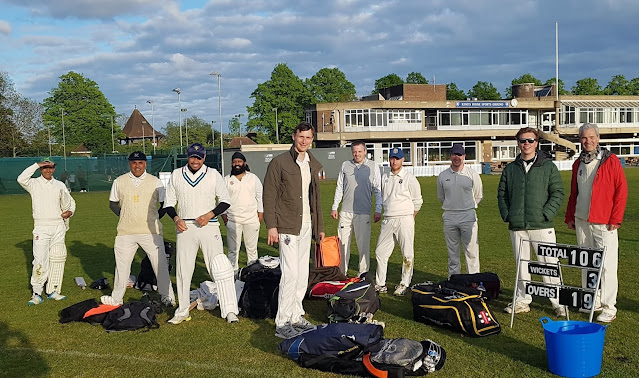