The rain showers cleared and Dodgers faced Marauders at Chiswick for the first game of the 2022 season. A delayed start meant a reduced 16-over match in what turned out to be very pleasant sunshine.

Dodgers took to the field first, with Charlie (3-1-5-2) and Jack bowling very tightly on a pitch that remained lively, despite the earlier rain. Matz, playing his first full game for Dodgers, took two wickets in two balls (the first a steepling catch pocketed by Jack in the deep) as the Marauders came and went in quick succession. Brothers Savan and Niket, guesting from Putney, joined the attack with Captain Ralph and by the end we had skittled out 7 of the Marauding batsmen for the round total of 100. Special mention must be made of the contribution of Extras, high scoring with an ominously large 31. More positive special mention goes to Mike Mc, who kept excellently behind the stumps.

While the Marauders batting had showed itself to be vulnerable, their bowling attack was top quality. The opening pair were effectively unplayable, with good-length balls rising vertically over the batters' shoulders, so that neither Mike D nor Jack could get into any sort of rhythm. At the half-way stage we were well behind the curve, and when Mike retired on 25* the required run rate was already approaching 10 an over. Jack, Tawhid and Jatinder hit out valiantly and ran well between the wickets, but the bowling continued to be accurate and the fielding secure. We fell 20 runs short but live to fight another day. 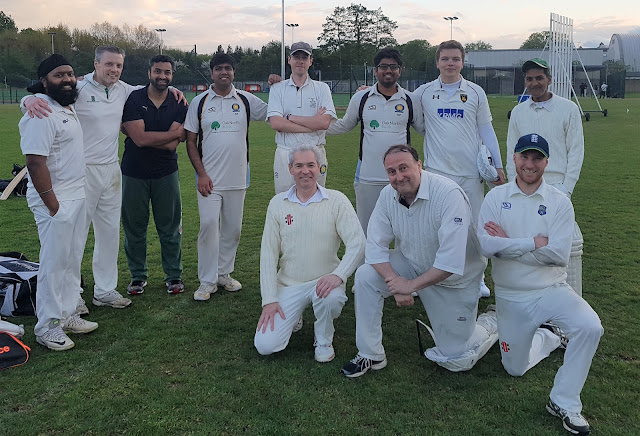