Having just seen the 'new look' England achieve the impossible by chasing down 299 v New Zealand at Trent Bridge, the Dodgers assembled at sunny Chiswick full of great hopes.

Going in to bat first, openers Mike Dollin and Dave Hoggins were forced to deal with some very tight bowling from the outset, as the Dinos found line and length with some surprising late movement into the bargain. With both falling cheaply, Jatinder arrived to steady the ship together with a welcome appearance from Phil, who turned back the years with canny nurdling and sharp running between the wickets. When they too fell, Dave Barnes and Jack arrived as pinch hitters, both retiring at 25 before Ozair (in his first cricket innings ever), Andre and Christian took the score on further. With Mike Mc and John H facing a ball each in the final over, we had well and truly made use of all our resources. Yet a total of just 112 on a good pitch with fast outfield felt a shade light.

The Dodgers bowling attack of Jack and Christian opened brilliantly, with no runs conceded off either of the first two overs and good pace throughout the rest of their spell. John H and Andre kept up the pressure, so that the Dinos were well behind the required rate when Dave B (despite broken finger) and Dave H came on as second change. The oppo still had strong batting to come, however, and their number 7 arrived with every intention of scoring the 10 now needed per over. All results were possible as we came to the last, but Christian snuffed out their chances by bowling the no 7 and we won by 5 runs. A delightful evening and a famous Dodgers victory. 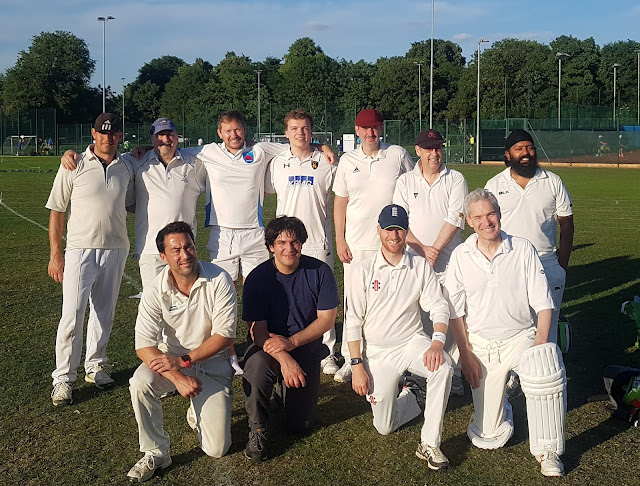