With the heatwave briefly subsiding, a slightly depleted Dodgers IX assembled on the far pitch at Battersea Park for a second encounter with the fathers of St Peter's School. Days of sun had made for an arid outfield and we elected to play on the artificial wicket, so runs were to be the order of the day.

Dodgers batted first, welcoming back old stalwart Matt Taylor to open with Charlie. After a tentative start, the two soon went up through the gears and Dodgers were on their way. Good supporting knocks from Jatinder, Mike Mc, Mike D and Ralph opened the door for a final partnership between Savan and Chairman John that took us up to the considerable total of 182 off our 20 overs. Even so, boundaries would be easy to pick off given that we were two fielders short, so there was no room for complacency.

The Dodgers bowling attack went to work with aplomb, Matt Stockbridge guesting for us alongside Savan and picking up three important wickets in his spell. A special bond was formed with Matt T, who rolled back the years to take two spectacular catches in the deep, followed by another later off Ralph. Mike D took a blinding catch low down at extra cover, while Matt S plucked one out of the air on the long-on boundary which would otherwise have gone for six. This plus Mike Mc's excellent keeping behind the stumps backed up the change bowlers Charlie, John, Ralph and Jatinder, but with five overs to go the Dads were still in with a good shout. They ended a dozen short of the target but 350 runs had been scored in the space of 40 overs. A good win and a very nice evening out. 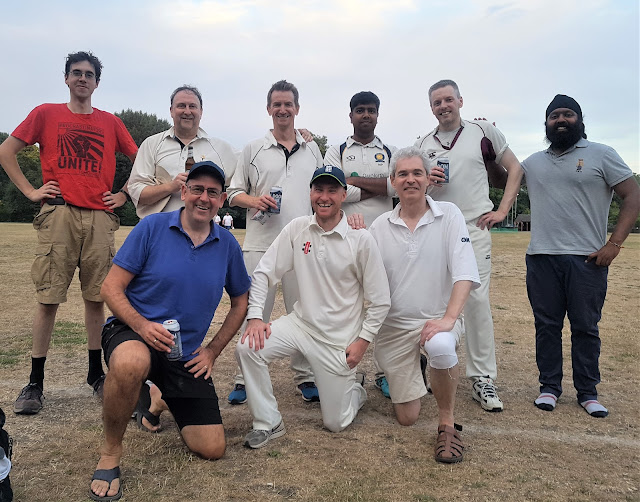