Posted by jhilary on August 10, 2022
A highly experienced Dodgers XI travelled east to Greenwich Park for our annual encounter with the unpredictable Carib Beer outfit. When we say 'highly experienced', we are talking two players in their 70s, two approaching 60 plus four more in or almost in their 50s. On a rough estimate in the pub after the game, we calculated that we had 550 years of experience between us.
Carib batted first on a remarkably green strip in the middle of an arid and enormous outfield. Dodgers bowled tightly throughout, but almost anything hit off the square was destined to go to the boundary. Suffice it to say that they racked up a total of 172 without really hitting out until the last. Aamir took two neat wickets, both clean bowled, and together with Captain Ralph secured a decent run out, while the latter also took a tricky catch at midwicket. Otherwise we did little to trouble the scorer, and prepared instead for the run chase.
Phil and Simon got us off to a fine start against some quality bowling, both passing 25* without offering any chances, and Tom then proceeded to notch up his own 27* off just 8 balls to put us firmly in with a chance of securing the necessary total. The innings progressed nicely and we were still in with a shout until the Carib openers returned to finish their spells, the ball now bouncing unplayably off a good length. We ended 11 runs short in what had been a most enjoyable evening, and headed off across Blackheath to the Hare and Billet to reflect on how experience is not always enough to secure victory.
Man of the Match votes: Tom 7, Phil 2, Aamir 1, John 1 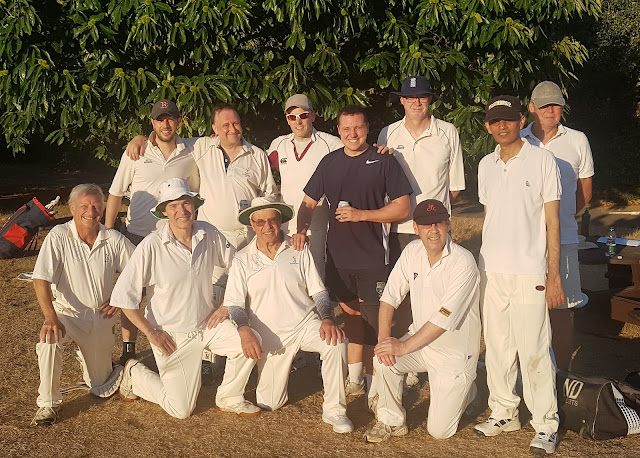