The Dodgers decamped to Essex for the last game of the 2022 season, on a cool morning that warmed up as the day progressed. The game was played at the higher Buckhurst Hill ground, the outfield feeling remarkably spongey after all the rain. Prior to the start, both teams marked the period of national mourning with a minute's silence at the wicket in memory of HM Queen Elizabeth II.

Dodgers took to the field first, opening with Jack and Chairman John. The Buckhurst innings got off to a good start but they were gradually pegged back as wickets began to fall, Jack providing the breakthrough thanks to a nice catch behind the stumps by Mike D. Charlie and Mike Mc took over the bowling duties and kept the pressure on with more wickets falling, until NJ performed his magic with a spell of 8-2-25-3, ably supported by guest veteran Mark and Captain Ralph. The champagne moment of our fielding effort was Brendan's exceptional run out, hurling down the wicket with just one stump to aim at. Jack and Charlie mopped up the tail and the Buckhurst total of 224 looked eminently achievable from the 40 overs at our disposal.

NJ and Mike D opened our response, the latter falling early to a decent catch at slip. Jatinder took his place and built a solid partnership with NJ of 94 for the second wicket, putting us in a strong position from which to win the match. The game swung against us, however, when Jatinder was given LBW by an aged Buckhurst umpire who had failed to hear or see the inside edge that deflected the ball onto his pads. Jack came in and the innings seemed back on track once again until NJ was caught and bowled for 81 by the young and impressive Rafay, who then proceeded to dismiss Brendan first ball. Charlie steadied the ship and all looked fine again until Jack was caught and bowled in a stunning reaction effort by the Buckhurst skipper Ramesh. Still we felt that we had enough batting to come, but Mike Mc was unfortunate to be run out by a direct hit and Captain Ralph skied one early in his innings, leaving John to join Charlie in the middle. The game was by now very much in the balance, and the balance tipped against us when Charlie was caught behind off a snorter. Our guest player Mark came in last but John miscalculated his partner's ability to hobble to the other end off a long single and our innings was brought to an end 23 runs short. It had been a most enjoyable day's cricket, and a quick one at the main Buckhurst Hill pavilion brought the curtain down on another fine season. 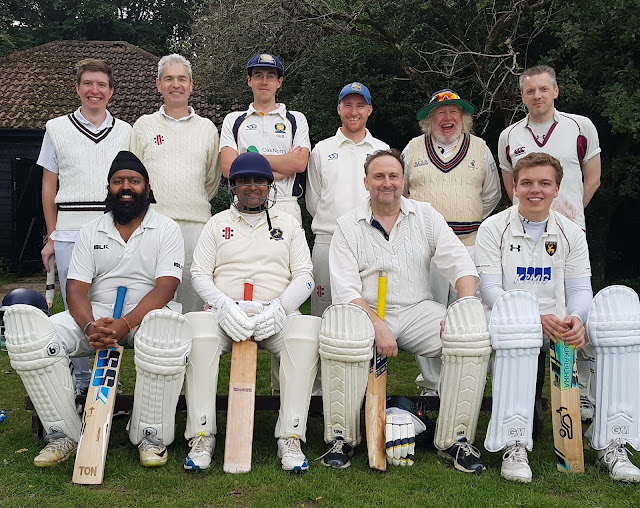