Dodgers returned to the upstairs room of the Royal Oak in Tabard Street on 25 March 2022 for the 2021 AGM, held slightly later than planned due to the upsurge in covid cases at the end of last year. It was a welcome return to in-person meetings after the enforced online AGM of 2020, and a very pleasant evening spent in excellent company (the pub has even spruced up the room at last). While the full minutes of the meeting may or may not be circulated at some point [STOP PRESS: MINUTES NOW BELOW], the all-important awards for the 2021 season were announced as follows:

We did not omit to mention, of course, that we regained the Ken Block Trophy after having tied our first two games with Superstars. 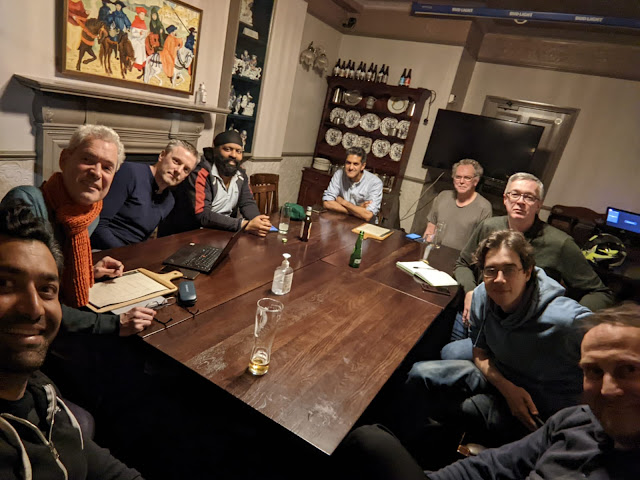 It was noted for the record that the minutes of the previous AGM had been lost.

Thank you to Mike for his work in arranging a good fixture list for the previous and coming seasons.

Thank you to Ralph for all his work over the previous season as captain and treasurer and in advance for his work for the coming season.

Noted the marvellous curry at the Lahore Kebab House.

Unfortunate injury and absence in the season to Mike Dollin, Charlie, Komal and Mike McIntyre.

Depleted squad and thanks to South Bank CC players for filling in. It will be nice if we can have a full squad this coming year.

Thank you to everyone for playing the game in the right spirit.

There followed the traditional ceremony of the mention of caps with no expectation of resolution.

Appreciate Mike for arranging the fixtures

Looking forward to a season of good weather

Follow up discussion:
o   Questions were raised on recruitment
o   Attendees were grateful to Ralph for the work he does in the season but questioned the fairness and his capacity to do everything that was asked of him, even though he gave his time generously
o   The meeting unanimously agreed that Ralph should play himself more
o   Charlie noted that curry at Buckhurst Hill should ideally be standard at all games

One game per week, with one additional weekend game per month

A mix of home and away

It was proposed and agreed to keep membership fees at £6 per match (midweek), £10 (weekend) and annual subs at £25

All committee members stood unopposed and were reappointed for the coming year:

Tim to arrange a social in mid April